It is a living, working landscape that has been cultivated almost continuously since prehistoric times. This was one of the key reasons that this area was designated an AONB in 1973.

Prehistory Traces of earlier human activity can be found all over the landscape of the Lincolnshire Wolds. The area has over 350 Bronze Age round barrows dating from around 2,000BC. These were used to intern the bodies of the dead and were typically built for one important person or family who would often have been buried with grave goods such as pottery. A 3,500–4,000 year old Bronze Age mug (right hand image) and a beaker (below), were found in South Willingham in a sandpit after heavy rain in the 1960s. 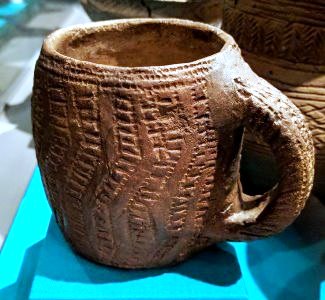 As well as round barrows, there are nearly 60 known long barrows in the Lincolnshire Wolds. These are usually more rectilinear in shape, and are older, dating from the Neolithic period.

The function of prehistoric barrows is thought to include:

Flint hand axes found deep within glacial gravel at Welton le Wold show that early humans were living in the Lincolnshire Wolds over 300,000 years ago. Isolated  pieces of stone tools turned up by the plough are typical of the evidence for hunter-gather peoples living in the Wolds between 10,000 and 6,000 years ago.

Romans in the Wolds

The Romans recognised the farming potential of the Lincolnshire Wolds and established major settlements at Horncastle, Caistor and Ulceby as well as a network of smaller settlements and villas. Some of these villas were built by soldiers who, upon retirement, were give an allotment of land.

The Romans also left a legacy of roads and communications links in the form of minor tracks and major roads linking the area to the wider road network, eg, Caistor High Street. , Lincolnshire

Roman settlements are thought to have undergone a period of decline at the end of the Roman period in the early 5th century and the only evidence we have of settlements through to the 7th century are from archaeology, usually in the form of pottery scatters. These scatters relate to the incoming Anglo-Saxons. In the Lincolnshire Wolds a number of early Saxon cemetery sites have been uncovered including an nationally important cremation cemetery at South Elkington.
From the late 9th century there is evidence of Scandinavian influence across Lincolnshire as a result of Viking incursions and later Scandinavian settlement. This influence can be seen in the many example of by place-names across the Lincolnshire Wolds, eg Scamblesby, Beesby.

By the time of the Norman Conquest the Lincolnshire Wolds was a place of numerous manors many of which are recorded in the Domesday Book of 1086. Many of these settlements have gone on to be the villages we recognise today. However, by the 14th century changes were happening in the landscape and a long process of decline had started for many Lincolnshire Wolds villages. This is why the area now has a legacy of shrunken villages and at least 100 deserted medieval villages (DMVs). The reasons for decline are complex but include the Black Death, climate change, a down turn in the rural economy and a change of agricultural practices including the rise of the woollen industry and the development of sheep runs.

There are many DMVs to see in the Lincolnshire Wolds but some good examples are at Biscathorpe, Walmsgate and Beesby. In the medieval period the farming landscape was wide open fields with complex pattern strip cultivation, seen today as ridge and furrow earthworks. These earthworks are usually gently undulating waves in the ground, and are often found around the edges of DMVs.

The human impact on the landscape of the Lincolnshire Wolds continued into the post-medieval period. Parishes were enclosed privately and by Act of Parliament effectively sweeping away the remaining medieval open field agriculture that had persisted for centuries. This in turn led to changes in farming practices and their impact on the landscape of more regular farm layouts and a wider variety of more permanent agricultural structures.
The railways came to Lincolnshire soon after enclosures and these too have left their mark. New lines were put in to serve the market towns of Horncastle and Spilsby and a network was put in linking Bardney to Louth and Boston to Grimsby, all cutting across or around the Wolds. Following the Beeching cuts in the 1960s the railway lines were closed, with some sections still visible.

There are also reminders of the industrial past in the Lincolnshire Wolds and the now peaceful countryside near Nettleton and Claxby was home to ironstone mining from the 1920s until the 1960s, providing ore for the steelworks at Scunthorpe. Remnant bricked up tunnel entrances can still be seen today.