The base for this diverse landscape lies beneath our feet - the geology.

Rocks are the solid geology, such as chalk, limestone and sandstone that were laid down in the Cretaceous period, between 140 - 65 million years ago. From being under a tropical sea, then covered in ice, to eventually becoming the highest eastern point between Yorkshire and Kent, the Wolds landscape that we see today has undergone immense change.

Hubbards Hills, Louth's 40m deep, steep sided chalk valley was originally cut by torrents of glacial meltwater during the last ice age about 40,000 years ago. The ice had dammed up the Hallington Valley to create a lake which spilled over into the Welton Valley as a waterfall. As this was cut back, so Hubbards Hills was formed. Such was the volume of water that this process took two to three hundred years.

Geodiversity is the variety of rocks, minerals, fossils, soils and landscapes, together with the natural processes which form them. It is the link between geology, landscape, nature and people - from where our ancestors first settled to where industry has developed.

Further information about the rocks beneath your feet can be found at:

The Geology of Britain

Download the Geology of the Lincs Wolds Leaflet (pdf) 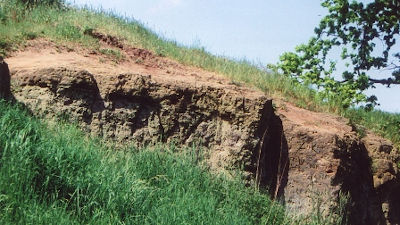 Other Leaflets of Interest:

Mine Machinery in Nettleton Bottom